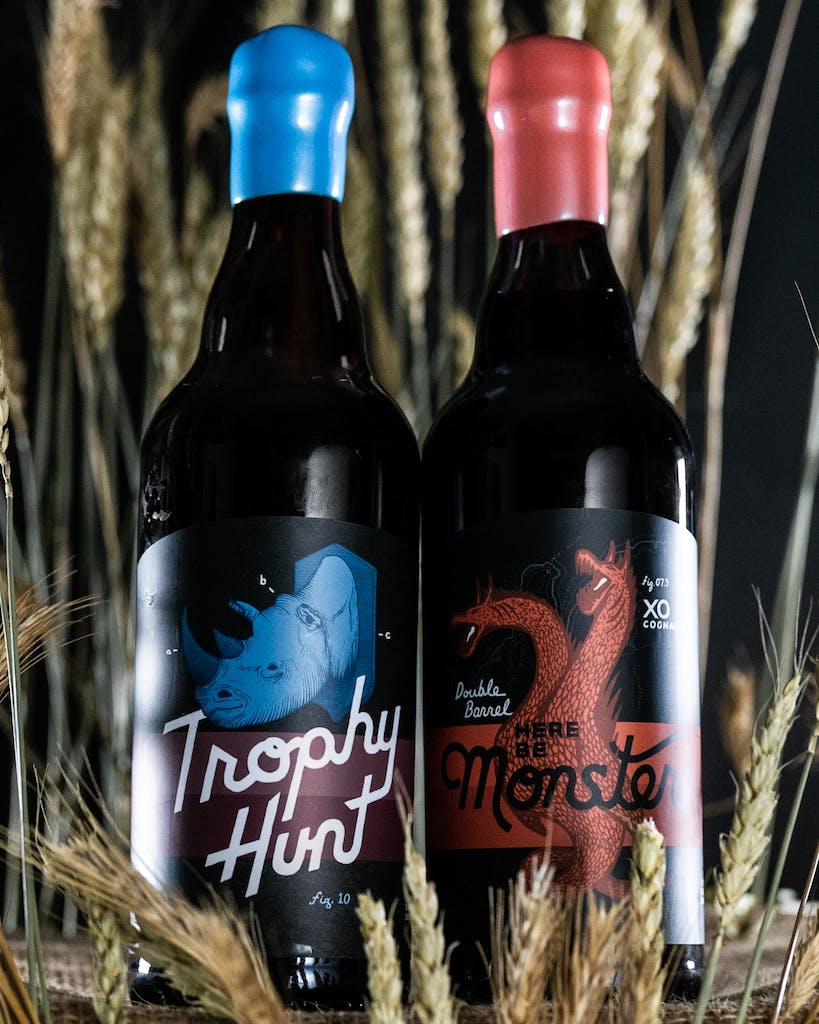 Our April bottle release brings forth two beers from our barrel cellar that are 2 years in the making – Trophy Hunt and Double Barrel Here Be Monsters – XO Cognac. We’re very excited to share these bottles with you!

Now in its third iteration, Trophy Hunt has become our vessel for exploring two of our favorite adjuncts – vanilla beans and cacao nibs. We started with several 6-8 year Willett Family Estate Bourbon and Rye Whiskey barrels filled with 23-month old Here Be Monsters. From there we added hand-processed Tonga and Comoros vanilla beans (two that we’ve been particularly enjoying lately). You’ll find notes of cherry cola and hickory from the Tonga, while the Comoros lends marshmallow flavors. Then we conditioned the beer on Ethereal Craft Chocolate’s Ghanaian cacao nibs, which are known for their rich flavors of milk chocolate and coconut. We enjoy experimenting with these common adjuncts and evaluating the subtle flavor contributions of different varieties.

For our third iteration of Double Barrel Here Be Monsters we began with four hand-selected 13-year Elijah Craig bourbon barrels that stood out for their incredible balance of baker’s chocolate, vanillin and roast. XO Cognac (cognac having been aged a minimum of 10 years in oak) has been on our wish-list for several years and when the opportunity to receive some of incredibly high quality arose, we knew we had the perfect base. Over the next 11 months we waited patiently as the beer picked up delicate notes of orange marmalade, wildflower honey and almond croissant. We’re really excited to unveil another iteration of this beer as we continue to experiment with both common and unusual finishing barrels for our beloved flagship Imperial Stout.

LEARN MORE ABOUT OUR VANTABREWS BOTTLE RELEASE
GET TO KNOW OUR CELLARMAN, KARL!